As P and I have completed paving our back yard with a huge 5x5m square, we set out today to get some furniture to fill the space.

Turns out the store we wandered into was having a ridiculous clearance sale because the new owner wanted to get rid of all the old stock... so we got a 7-piece outdoor dining set (table + 6 chairs) for $500 less than retail.

I am rather pleased.

Now if only it would stop raining so I can actually get out there to enjoy my back yard. Gah....

So I've been having these random attacks of hives for the past month or so. Every day, at least once, I will suddenly itch all over and break out in raised welts everywhere...

I was putting up with it and popping antihistamines every couple of days, figuring maybe it was the heat or something I wore or something I ate... But I've watched what I've been eating and it's nothing out of the ordinary, and I washed all my clothes and sheets and STILL I was crazy itchy!!!

So anyway, I went to the doctor today, and they took 3 vials of my blood to go do a bunch of tests.

They took my BLUD.

P and I made dinner, and it was DELICIOUS. The menu:

Dinner:
Pork Loin Roast WITH CRACKLING (mmmmm... that's the best part) stuffed with thyme, rosemary, and a LOT of butter. Served with white gravy made from whatever's left in the pan (the meat drippings, the butter, herbs, roasted garlic) + stock & white wine.
plus creamy mashed potatoes (secret: use cream)
plus steamed vegetables (just to keep it healthy)

Dessert:
Bread & Butter Pudding... made with chocolate panettone instead of bread. This was SO easy to make and absolutely heavenly. Served with a dollop of....yes, cream.

Lots of presents were opened. The Niece pooped and then went around telling everyone about her sore bum. She's 2 years old and very talkative.

I am still recovering from the food.

Now we are fattened, P and I are planning a total makeover of our back yard. Paving, digging, the works!

We will be little brown raisins by the end of the holidays, hopefully.

With puddles of butter around our ankles.

P and I went on a much-needed vacation to Japan and the Spore in the beginning of October.

Then we came back to Sydney and back to work, and figured we wouldn't be able to go back to the Spore for at least another year or two, since flying anywhere overseas out of Australia is just ridiculously expensive. Why does Australia have to be so far away from everywhere else?

However, I received a call this morning that my maternal grandfather passed away. It was rather unexpected, since even though he was getting on in years (as grandparents tend to do) and getting frail, he was actually on the up and up as far as his health was concerned. He was doing so much better in recent months (went from being bedridden & largely incoherent to mobile and totally lucid) that his passing this morning was strangely unexpected. Although I suppose going peacefully in your sleep when you are well is much better than going painfully when you are ill...

Anyway, P & I are heading back to Singapore for a couple days for the funeral and to be there with our family during this time. P's parents generously gave us their frequent flyer points to help us with the expense so that we could both go. (Have I ever mentioned how much I love my in-laws?)

So off we go on the plane again.

We'll be missing the album recording weekend at church, which is a little bit of a bummer, but family first.

After tomorrow's wedding, P & I will have shot 3 weddings in 8 days.

If we were expensive photographers, we'd be RICH.

Too bad we're pretty cheap (at the moment).

Time to raise the prices, methinks!

I really must start posting in LJ again... haven't done it in awhile! Too many things to look at and do online.

Brief summary of the past few months:
- P had a couple of gout attacks. Not nice.
- Lots of weddings.
- Spring is here in Sydney. Yay!
- We acquired a new fridge, which is so big I can fit my whole body into the freezer side. It's huge and looks absurd in our tiny kitchen. Oh well.
- We got a new camera: Canon 5D MkII. Yay!
- Same old same old at work.
- Got rid of the Honda Civic and got an older model Audi A4. Automatic, so I can drive it stress-free. I've told P that this is the last time we're changing cars, because it's getting ridiculous and is an awful waste of time and money. Since we've been together (3+ years) he has changed cars FOUR times!

Not much to report, really.

Oh, we're being good children and eating more veggies, if anyone's interested. We actually get a box delivered to our house now.

Well that's all for now, I think.

P visited me in the office and told me he had a present for me. I suspect it's really a present for him, since he can only change up to this once his current phone contract expires... so I get to have it instead. 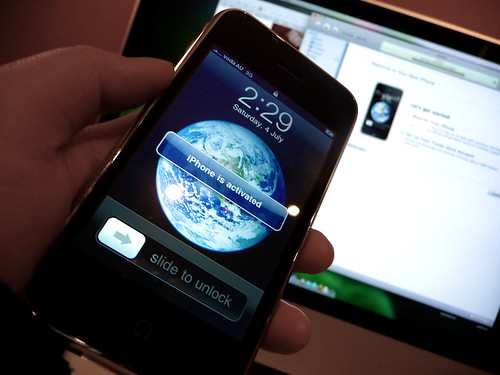 I'm a little tentative since I really do like the sensation of buttons clicking when I type on my phone. And now it's all touch-screen... and I usually mess up when I use P's current iPhone. But apparently "I'll get used to it" and "I'll grow to love it" and "I won't know how I used to live without it"....

As you can probably tell, I'm a little bit ambivalent about this new acquisition.

But I'm willing to give it a shot.

I love Apple (I even converted my hubby and now he's a raving Mac geek), but this is something I've put off for a while. Don't know why. Maybe I'm averse to change. Hmmm.

On Sunday P and I went to the PMA Australia 2009 Imaging Technology Show at the Sydney Convention Centre.

We went as "trade"... we got in for free because we were "professional" photographers!

It was fun indeedy... looking at all the different business vying for your business... all the cool products... and all the kinda-lame products. I felt like a proper photographer indeed.

I used to love watching Jon & Kate Plus 8. I thought it was the cutest show in the world, and those sextuplets were sooooo adorable, and watching those parents handle 8 little kids and have so much fun.... it was just delightful. I would watch it on TV. I would search for clips on YouTube.

But then, gradually, I found myself starting to dislike the show a little. Not the kids, who were still has cute as ever, but watching those "parent interviews", with Jon & Kate narrating and babbling on... it just started to irritate me. I just couldn't understand their relationship. Over the past year, Kate became increasingly mean, cynical, self-righteous and critical -- especially toward her husband -- and Jon simply... shrank. I would cringe at how she corrected his every move, yelled at him, scolded him like a child... and how he would simply roll his eyes and shrug and "surrender" to her simply to avoid the confrontation.

It made me sad when they showed a rerun of an episode that showed footage of them as a dating couple, then an engaged couple, and then at their wedding and the first couple years of their marriage. They were like different people. They joked around and laughed with each other. They were happy.

And now they've announced that they're splitting up, after 10 years and 8 kids, but continuing the reality TV show circus. One wonders why they didn't announce that they were quitting the show to work on their relationship and marriage instead... but oh well. After watching their relationship and communication disintegrate in front of the camera for a year, one wonders why there wasn't an earlier outcry from the public to get them into counseling. But nobody bothered. We just kept watching, and they fell apart.

And it makes me sad.

... I decided to dose up on vitamins.

And now my pee is fluorescent!

I overfilled it a bit and couldn't really roll it.

It's going to be one messy lunch tomorrow!
Collapse